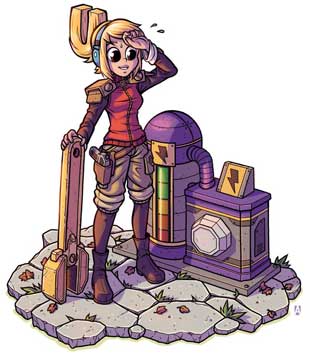 One of the best trends that keep coming back to video games is side-scrolling platforms such as Iconoclast. This new game made his debut not so long ago, and it quickly rose to prominence among the indie community. The first port of the game was released to mainstream powerhouses PS4 and PS Vita, but the latest release was aimed at the Nintendo Switch, and it translated beautifully, making the game feel right at home. Iconoclasts stand out for two main reasons: it looks, feels and plays a lot like classic Metroid, and it has one of the greatest storylines conceived to date for video games.

Iconoclasts settings put us in the shoes of a girl named Robin. She’s your above-average smart girl with a penchant for denying societal order in her world and with abilities that differ from her designated role. As you can expect, the sci-fi setting of the games takes humanized characters to another galaxy where things are pretty different than earth, but also strike very close to home. The main antagonist to our character is a local religion named The One Concern. They have a massive influence in every single aspect on the life of the inhabitants of Robin’s world. Since she’s the first one to rebel to their designs, it’s up to her to make her way out of the mess she created.

Expanding on the story would spoil it for the people who genuinely enjoy a good plot, and Iconoclast manages to have that particular element very well handled, even if most of the gameplay is a 2D platform. The game takes on the most diverse topics such as familial responsibility, environmentalism, religious zealotry, and competing faiths with taste and humor. The overall cast of characters is too large to number, but you can certainly feel how much each character that interacts with Robin makes a valid point by fleshing out their role with well-chosen dialog, especially those who face Robin as antagonists.

No game can come out this good without some solid design behind it and Iconoclast has that in spades. Even with the pixelated 16-bit feel, the game plays as good as it looks. The music will take you back to simpler times while making you feel how old tunes can be improved with new techs such as it happens with Sinthwave or Vaporwave tracks. The game takes a cue from Metroid in more ways than one: you get to unlock a section of the map by exploring a room completely. As for Robin, you don’t need to equip her too much to get her through her mission. The game itself demands a lot of logical thought and patience to be explored, but once you have it figured it out, it’s easy to get through it.

As far as upgrades there is very little to be collected, but the game makes you work for it on each puzzle. The exclusive option to gather certain materials to trade them off certainly feels like a welcome addition. This is one game that finally doesn’t demand any mining of inner currency to enjoy it, just an old classic find and seek. As for the skills that can be improved, most of them have to do with the reach of preexisting abilities as well as the energy meter for Robin. The game doesn’t have a lot of storage space for the things you can carry with you, so the trade dynamic is increased because of that. All the puzzles offer some form of reward. If you wish to make the most of the game we recommend going through them with the right amount of time to dedicate your attention to it.

Iconoclasts is clearly inspired in one of the best offerings for the classic Nintendo consoles. Given the fact that Nintendo hasn’t given us a solid Metroid in years now, we certainly can sit back and enjoy this game for the time being to fight our urges. The bosses fights require a level of analysis that can take you back to old 8/16-bit times where a strategy was needed to make things happen. It’s a welcome experience that can be enjoyed by experienced players and newcomers alike. The game is colorful, daring and inviting. We sincerely hope you enjoy it as much as we did!